From Cluj to Budapest

I woke up earlier than I expected, excited to drive from Cluj-Napoca, Romania to Budapest, Hungary. The front desk called and ordered a rental car, which arrived late morning. Meanwhile I ate breakfast with those conference speakers who remained at the hotel.  The car arrived but without sufficient papers to leave the company, so I had to take the car delivery man to his house (Not his office - his house!), so he could pick up the papers.

I stopped at a shopping mall, hoping to get a card for my phone that would allow it to work in Europe. My phone had lacked the ability to call or receive email or browse the web since I arrived, except when I was connected to the hotel wi-fi. Before I left America, I had called the local AT&T store to ask how I could use my phone in Europe. When I told him I bought the phone at the Microsoft store, he told me it was certainly unlocked and the best solution was to buy a SIM card after I arrived in Europe. I found a shop at the mall that would sell me a SIM card; unfortunately, when she inserted the card into my phone, we received an error message that the phone was locked by a provider. This was a problem because I was counting on using GPS to tell me how to get to Budapest. I had no idea even how to get out of Cluj, much less which road led to Budapest. I found a solution to this problem: I stopped at a Travel Agency in the same shopping mall, where a friendly travel agent printed out a map to Budapest and translated the key directions for me. I was on my way.

I arrived in Budapest about 7 hours later, after only getting lost 3-4 times.

I didn't have directions to the hotel but it was located in downtown Budapest and I assumed that it would be obvious how to get downtown (as is the case in most American cities). Sadly, I found myself driving lost among the outskirts of Budapest. I pulled over to question a few pedestrians but none spoke English. Finally, I found a helpful lady and 2 high-school age girls who were leaving church. They not only found directions on their smart phone, but they rode along with me to guide me to my hotel before taking a bus back to their home. In America, it is almost unheard of for 2 innocent girls to get into a car with a stranger (much less, a foreign stranger), but I'm glad these girls had no qualms about this.

I thought I was late meeting Adam and Magdolna, but I learned that Budapest is in a different time zone than Cluj, so I was actually early.

They took me to a nice outdoor cafe, where we ate plenty of Hungarian food. After dinner, we walked along the river and he advised me on sights to visit the next few days. 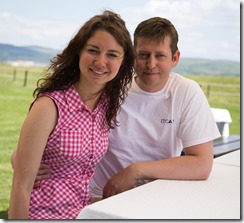 The busy schedule, extreme travel, and lack of sleep from the last week caught up with me and I slept 12 hours before slowly waking up around noon. I spent much of the afternoon in a small cafe sipping a latte, writing, and watching the world go by.

Adam had left town for 2 days to visit his father, so I toured the city on my own.

In the late afternoon, I headed up to the Castle district, which lies across the river on a hill overlooking the city. The palaces of the Austro-Hungarian Empire have been restored and turned into museums. In fact, the entire hill is covered in museums, along with old churches and monuments. The view of the city is amazing from this area. It was dark before I finally climbed back down and crossed the river to my hotel.

My travels were guided in part by suggestions from Adam and from a Walking Tour outlined on a map of Budapest that I picked up at the hotel.

Monday night, I had a chance to do laundry at my hotel and it felt good to freshen my clothes. 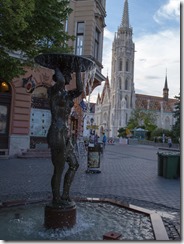 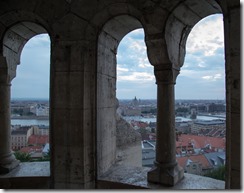 The Marriott I originally reserved was nice (suite of rooms, full kitchen), but far too expensive for my budget, so I reserved an apartment in the Jewish District. I checked out of the Marriott and headed for Gellert Hill, so named for St. Gellert, who - according to legend - was tied in a barrel and thrown from the mountain by pagans to die in the Danube.

The climb to the top of the hill was a challenge, but it was worth it. Halfway up the hill, one finds a statue of Gellert, surrounded by roman columns overlooking the city and a waterfall.  At the top stands a 19th-century citadel and a magnificent statue dedicated to the people of Hungary.

Near the bottom of the hill is a monastery built into stone of the mountain. The monastery is closed to the public, but the associated church is open. The contrast between the stone hideaway of cloistered monks and the bustle of downtown Budapest is startling.

I walked across the Liberty Bridge and through downtown Budapest visiting (among other sites) the Central Market Hall, where dozens of vendors set up stalls to sell meat, fish, vegetables, and other wares; The Hungarian National Museum; and the Church of St. Michael

I walked back to the hotel to pick up my car and head to my new hotel. Streets in Budapest are not marked nearly as well as in the US (if they are marked at all) and the sign for the hotel was not visible from the street, so it took me a long time to find the hotel and check in. .

When I finally find the it, I was pleasantly surprised. Although the rate was a third what the Marriott charged, I had a suite at least as big as the Marriott’s. And I had free wi-fi. If I return to Budapest, I will first check out All4U Apartments in the Jewish District. My room overlooked a pedestrian area of restaurants and bars

I had to rush to meet Magdolna, who had invited me to dinner. She found me wandering aimlessly a half block from the restaurant, searching for the correct street number. We shared Hungarian fish soup and a Hungarian dessert consisting of pancakes, rum, chocolate, and whipped cream. After dinner, we walked around an old part of Budapest before I dropped her at her subway stop.

I finished the evening with a craft wheat beer at Léhűtő near my hotel.

When I tried to sleep, I discovered the downside of a hotel near so many bars. I drifted off to the (very loud) sounds of a rock band and a techno DJ at bars below. 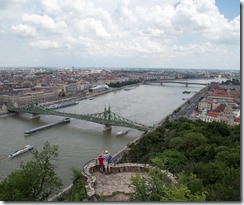 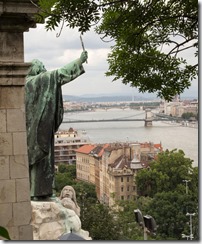 In the morning, Adam returned to Budapest and invited me to a Turkish bath. I walked from my hotel (about a mile) and I was ready to relax when I arrived. A Turkish bath consists of about a half dozen small pools, each set to a different temperature. Nearly-naked men soak in them for a bit, then move on to the next pool. I tried them all - from the shockingly cold water to the shockingly hot water. Spotlights of different colors shine from the ceiling into the largest pool. Supposedly, different color lights will heal different ailments. I'm not sold on this medicine, but I did try it.

All in all, it was a relaxing morning, hanging out and chatting with Adam.

Afterward, I had lunch near my hotel and drove back to Romania.

I had no trouble getting back to Cluj-Napoca, but I had no idea how to get to my hotel. I stopped at a downtown restaurant, where I received directions that did not help. By some miracle, I stumbled upon the hotel a little after midnight. I only slept about 4 hours before I had to get up and drive to the airport for my flights home. 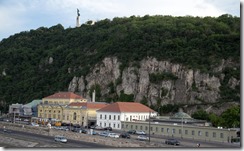 This is part 3 of a series describing my 2014 trip to Romania and Hungary.