I didn't mind the 3 flights; I didn't mind the 15 hours of travel. I didn't even mind the lack of sleep or the oversold flights. But, as I sat in the Cluj-Napoca airport and watched the luggage conveyor belt stop without my suitcase, my heart began to drop.

The good news was that my friend Tibi was waiting outside baggage claim, and a friendly face was what I needed as I headed to the office to fill out the paperwork.

Tibi drove me to his home in downtown Cluj-Napoca, where we picked up his wife Nicoleta and we went out to a nice lunch at a local beer garden. I spent the afternoon at Tibi's house before catching a bus down to Sibiu.

I came to Romania to speak at the IT Camp in Cluj-Napoca (http://itcamp.ro), but it's been 26 years since I've been to Europe and I've never been to Eastern Europe, so planned for a longer trip.

I scheduled 2 days with a tour guide in Sibiu. Although the tour didn’t officially start until Tuesday, Adela was kind enough to pick me up at the bus station and drive me to my hotel Monday evening. 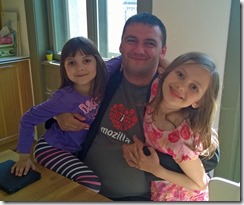 Tuesday morning, Adela and I walked around the old city of Sibiu. Sibiu is a walled city, originally built by the Saxons to protect western Europe from invasion by the Turks. The city has a mix of many different architectures, due in large part to the different nations that have occupied Transylvania over the centuries. The Germans built 3 clock towers so one clock would always be visible from anywhere in the city. Roman architecture is evident in the arches.

Our first stop outside the city was Astra - an outdoor museum featuring reproductions of buildings from a great many regions and eras of Romanian history. The Saxons only allowed Romanians to build their churches of wood, so only these reproductions remain.

We made a stop in Sibiel, known for its icons - religious scenes painted on glass. Catholics in this region have been creating these works of art for centuries, but it wasn't until the 1960s that a local priest asked citizens to donate their icons to a local museum, where everyone could view them.

Next, we drove to Cisnadie, which is known in German as Michelsberg. Apparently, many of the cities founded by Saxons have both German and Romanian names. We hiked up to the fortified church at the top of the mountain overlooking Cisnadie. The church was recently restored and the views from the top are spectacular. 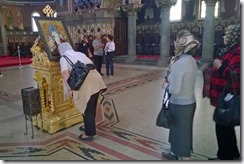 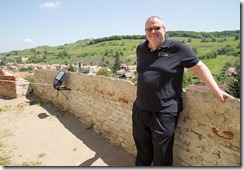 Sighișoara is allegedly the birthplace of Prince Vlad - more popularly known as Count Dracula, so of course we had to go there. Historical records suggest that Vlad's parents visited there at the time of his birth and some documents have even identified the house in which he was born. We had lunch in the restaurant that now occupies this house.

Sighișoara contains an old walled city and a church sits atop a steep hill within this wall. We climbed the hill to see the church and the cemetery just outside. Even at midday in full sunshine, it was a bit spooky.

Following the drive back to Sibiu, Adela dropped me at the bus station, where I was taken back to Cluj-Napoca. The bus dropped me on the city's edge and I took a cab to my hotel. The cab ride cost about $3 - an startlingly low amount for an American taxi. 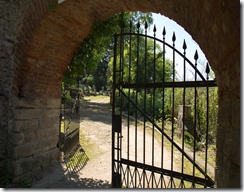 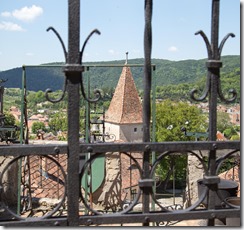 This is part 1 of a series describing my 2014 trip to Romania and Hungary.