Up early to hear the keynote. Peter Keller talked about fear in organizations - what causes fear; how fear can hurt us; how to manage fear; and how fear can motivate us to achieve new things.

Mihai Tataran and Tudor Damian gave a second keynote - this one about security. The highlight was Tudor's demos showing how easy it was to hack a user's password in a typical corporate environment. The main effect of this second keynote was to make the audience afraid for the security of their data, so it's a good thing it was preceded by a talk about fear.

Later that morning, I gave my Data Visualization talk. The room was nearly full and it was very well received. I was fortunate that I could give this talk in English, even though English was not the first language of most of the audience.

In the evening, the conference organizers reserved much of the hotel dining room and treated the speakers to dinner and drinks. This was a great opportunity to get to know the other speakers - most of whom were European and most of whom I had never met. 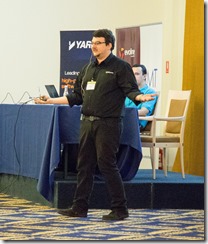 I delivered my second presentation - this one on building a Windows 8 game using Construct 2. The audience was great and seemed to enjoy it.

I recorded 2 interviews with Technology and Friends - one with Peter Keller and one with Tudor Damian. Both of these have been published at http://technologyandfriends.com/.

I took more time today to talk with the conference attendees. Unlike most American developer conferences, this one was attended by nearly 40% women. The industry seemed far less dominated by males here than back home, although I did notice only one female speaker.

In the evening, the conference organizers took the speakers to a local restaurant and treated us to another multi-course meal. Again, it was a great opportunity for me to get to know the speakers. Although most of the attendees seemed to be from northern Transylvania, I met speakers from Romania, Hungary, Poland, Italy, Bulgaria, Norway, England and the United States. 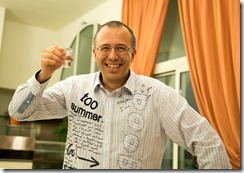 The conference was over but IT Camp reserves the day after the conference for a cultural outing for all the speakers. This year's outing was to Alba Iulia - a beautiful city south of Cluj. Alba Iulia was the first capital of Romania when it gained independence after World War I.

After the bus ride to Alba Iulia, we stopped for an excellent lunch and set out to walk around the city with a tour guide. Alba was a walled city that was well-fortified against attacks but that was never attacked. The country have spent the last five years restoring the city's historic buildings and monuments and the place is gorgeous. Our tour guide was supposedly telling us about the history of the city, but it was hard to tell as he never spoke above a whisper and there were several dozen of us.

After the bus ride back to the hotel, we were treated to one last dinner. I don’t recall attending a conference that treated speakers as well as IT Camp. From the 5-star hotel accommodations to the food to the conference organization, everything was done well.

After the bus returned to the hotel, the conference treated us to another (excellent) dinner. We hung out in the lobby after dinner talking and I decided I would drive to Budapest in the morning. I had met Adam and Magdolna from Budapest a few days earlier, so I made plans to meet them for dinner. 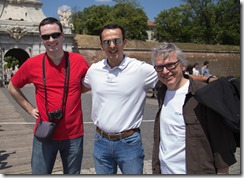 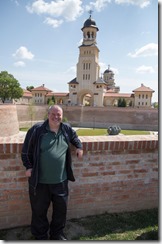 This is part 2 of a series describing my 2014 trip to Romania and Hungary.