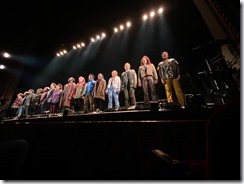 The musical "RENT" debuted 25 years ago in New York City. At the time, it must have caused some people to be uncomfortable. It  included homosexuals and drag queens and drug addicts and interracial relationships and fighting back against capitalist greed and AIDS.

Set in Manhattan's East Village, it paints a bleak picture of life for struggling bohemians of that area. 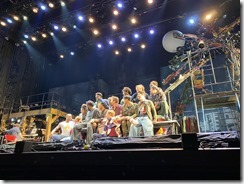 But it also presents a message of hope. Despite the tragedies he suffers, Tom Collins remains optimistic. Despite the pain of a dead girlfriend, Mark attempts to love again. Despite losing his girlfriend to another woman, Mark becomes friends with the lesbian couple. And the cross-dressing Angel inspires us all, despite dying of AIDS.

And, of course, there is the music. RENT is filled with rock songs and ballads and show tunes to lift you up and to pull at your heart.

It took me 25 years to see this classic. But I finally made it to the CIBC Theatre in Chicago last week. I am glad I did.