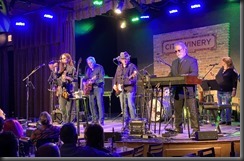 What does a band do when the lead singer who helped define their sound departs? 10,000 Maniacs faced this challenge when founding member Natalie Merchant left to pursue a successful solo career in 1993 after 12 years with the band. The Maniacs did the smart thing: They hired singer / violinist Mary Ramsey. The transition was seamless as Ramsey's voice sounded remarkably similar to Merchant's.

Almost three decades later, Ramsey still fronts a band that includes Dennis Drew (keyboard), Steve Gustafson (bass guitar), Jerry Augustyniak (drums), and John Lombardo (guitar) - all of whom have been with the band since the early 1980s. Jeff Erickson (guitar) is the newcomer, having only played with the group for 20 years!

The show was bookended by songs of Night and Day, opening with their cover of "Because the Night" - a Bruce Springsteen song made famous by Patti Smith - and closing with their biggest hit "These Are Days". In between, they entertained and delighted those who braved the elements to see them. The band mixed originals and covers, including a stirring version of Neil Young's classic "Harvest Moon".

The place was only about half full, but this did not seem to diminish the band's enthusiasm. The performers seemed to gain energy as the night went on. Their songs are often ethereal, but they shifted into a rocking mode from time to time. Ramsey's voice is still strong, and Gustafson's charm was evident when he stepped to the front of the stage.

This year marks 40 years of 10,000 Maniacs - a remarkable accomplishment, given the stability of their lineup. The City Winery has been a frequent stop over the years, but this was my first time seeing them live. I left the show with a smile, and I look forward to many return trips.