50 years later, Ray Benson Keeps the Fun in Asleep at the Wheel 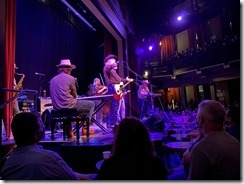 The fiddlers were already playing when they walked onto the stage at the Old Town School of Folk Music in Lincoln Square Sunday evening. Behind them, strode guitarist and lead vocalist Ray Benson. At 6'7", the founder of Asleep at the Wheel is larger than life - both figuratively and literally.

The band opened with the Bob Wills tune "Cherokee Maiden" and, for the next two hours, they played what could have been a selection of my favourite AATW songs!

They performed more Bob Wills songs, including "New San Antonio Rose", "Faded Love", "Take Me Back to Tulsa", and "Big Balls in Cow Town". This is not surprising. For five decades, AATW has been carrying on the tradition of Western Swing music popularized by Wills and his Texas Playboys in the 1930s and 40s. They even played "Bob Wills Is Still the King", Waylon Jennings's tribute to Mr. Wills; and "Milk Cow Blues", a song recorded by Wills's younger brother Johnnie Lee Wills.

The band mixed in many classic tunes, such as "Route 66", "The House of Blue Lights", "Hot Rod Lincoln", and "Tiger Rag"- the latter of which featured frantic solos from each member of the band. Speaking of the band, every member was excellent. They brought energy and fun and projected both onto the crowd.

Of course, the group played some original songs ("Half a Hundred Years", "I Guess I'll Call it a Day Tonight") and "Miles and Miles of Texas", which is one of their best covers.

A highlight of the evening was a moving interpretation of Guy Clark's "Dublin Blues", a song I've always loved and did not know AATW had recorded.

They closed the encore set with an a cappella version of "Happy Trails" - a song made famous by the legendary cowboy duo of Roy Rogers and Dale Evans.

Asleep at the Wheel gave us an amazing performance. They reminded us how much fun music can be.