"A Clockwork Orange" by Anthony Burgess 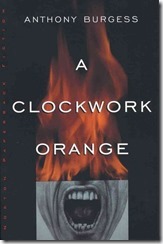 A Clockwork Orange by Anthony Burgess is the story of Alex - a juvenile delinquent sociopath living in a dystopian society of the near future. Alex and his friends spend their days and nights  terrorizing anyone they can. Alex fills his life with rape, battery, robbery, and (eventually) murder. In prison, Alex becomes the subject of an experimental treatment that forces him to become violently ill at even the thought of violence or sex. He is released back into the violent society, where he is harmless, but has no way to defend himself.

This book is a morality play - primarily about whether removal of free will is justified if it results in greater lawfulness and whether the needs of society take precedence over the rights of individuals. The message is not subtle. Burgess fills the first third of the book with acts of extreme violence in order to emphasize Alex's corruption. When he is treated and released, his punishment comes quickly, harshly, and very violently.

One of the reasons I love this book is Burgess's creative use of language. It is told in the first person by Alex, who speaks in Nasdat, the slang of  his day. Burgess invented Nadsat by combining English and Russian words ("droog" for "friend"; "golova" for "head") with a bit of cockney rhyming ("pretty polly" for "money") and some childlike phrases ("appy polly loggy" for "apology"). This may slow down the reading as we must infer meaning of words from their context; but it adds a timeless quality to the book that it would not have had the author chosen an existing slang from a specific period.

This book is not for everyone. The use of Nadsat makes it more difficult than most books of this length. Some readers will not be able to get past the violence. Some may think that, because of Alex's intelligence and charm, Burgess is glorifying him and his violence. But the author uses this violence as a setup for Alex's fall. Alex justifies his ultraviolent lifestyle because he lives in an ultraviolent society. But he takes this logic way too far, contributing mightily to the violence and blaming all his misfortunes on others. Still, he is proved right in a way, as he is completely unable to cope in a world when he becomes incapable of responding with any violence. Alex is a somewhat sympathetic anti-hero, but his soul is clearly corrupted - perhaps beyond redemption.

The book does not take a position on the moral questions it raises - particularly around the rights of individuals versus the safety of society. Clearly, Alex and his droogs were a great threat to their world and citizens feared even to go outside at night. But the government's solution was also a failure, causing them to re-think how they addressed crime.

Burgess himself did not count A Clockwork Orange among his best novels. He claimed he wrote it in just three weeks and he preferred stories with a subtler message.

But I loved it. I loved the language and the style. I loved the scenes that would mirror themselves in the beginning and end of the book. I loved the twisted sense of justice displayed in the story. And I loved how the beauty of the language contrasted so sharply with the ugliness of the actions it was describing. This tension kept me focused throughout the book.

It is a real horrorshow story that remains in the golova of me and my droogs.