"A Darkness at Sethanon" by Raymond E. Feist 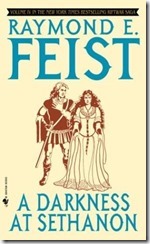 A Darkness at Sethanon concludes Raymond Feist's Riftwar Saga - a trilogy that became a tetralogy when Feist decided to rewrite volume 1, splitting it into 2 books.

An invasion by the dark sorcerer Murmandamus threatens the world of Midkemia and ultimately all other worlds in the Riftwar universe. Murmandamus is determined to capture the city of Sethanon and the powerful lifestone buried beneath it. Our heroes from the previous novels (Pug, Tomas, Arutha, and others) gather the knowledge, weapons, and allies they need to try to defeat Murmandamus.

There are twists. Characters we thought dead are found alive, former foes become allies, and Murmandamus's motivation is not what it seems.

This book is larger in scope than its predecessor as the characters travel across dimensions and even travel backwards in time to the beginning of their universe. The time travel sequence gives the characters and the reader insights into the history of the universe and its many sentient and magical races.

Feist is better at action than at character development. Not that the characters are bad - it's just that he jumps them ahead abruptly, rather than letting us watch them mature and otherwise change. And this book has plenty of action, including several large battle scenes.

I'm glad I stuck with this series, as it got better as it went along.