A Full SPACE Shows Up for Billy Branch 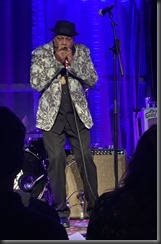 Harmonica player Billy Branch is a connection to the great Chicago blues artists of the past. He has played and recorded with Chicago legends Willie Dixon, Lou Rawls, Koko Taylor, Syl Johnson, and Junior Wells, as well as a host of others.

He founded and led The Sons of the Blues almost 50 years ago and brought the current incarnation of that group to Evanston's SPACE nightclub Saturday night. The venue was completely full, including some who watched while standing in the back.

Branch brought with him many friends - some of whom were descendants of great bluesmen like Willie Dixon and Little Walter. Little Walter had a special place in tonight's concert. Branch and the S.O.B.s recently released an album of Little Walter songs.
https://amzn.to/3h2mXQZ

Like Walter, Branch sings and plays the harmonica, and he delighted the crowd in doing so on this night. He drew heavily from this album, "Nobody But You", "Mellow Down Easy", "Juke"

The Sons' current lineup featured top-notch musicians Andrew "Blaze" Thomas. (drums), Marvin Little (bass), Giles Corey (guitar), and Sumito Ariyoshi (keyboards), along with Branch. Little occasionally stepped to the front to engage the audience with humorous banter, but it was Ariyoshi's playing that really shined - especially on his solos. The sweetness of his melodies contrasted with the blistering of Branch's harmonica.

At 70 years young, Branch lacks the stamina of his youth. When he told a story, he joked that he did so for a chance to catch his breath; He also stepped away from the stage to allow his younger bandmates to play a couple of their own songs; and the performance lasted only about 100 minutes. But it was enough to remind us how much we love the blues and how much we appreciate those keeping alive the legacy of blues in Chicago.