"A Handful of Dust" by Evelyn Waugh 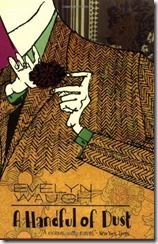 Tony Last appears to have a good life. He is are young and wealthy and married to a beautiful woman and he enjoys spending time at his family's country home. But Tony's wife Brenda is unfaithful; Tony is the only one unaware of Brenda's affair with John Beaver, the dull and lazy son of a well-to-do businesswoman.

Tony's biggest mistake is that he trusts his wife and expects she will soon spend more time at home, instead of traveling to London every weekend. As a result, he is unprepared when he learns of her betrayal. When she demands a divorce, he leaves his home in England, completely abandoning his comfort zone to cross the ocean and to search for a lost city in South America.

None of the characters are particularly likeable. Most are concerned with the self-absorbed, meaningless social life of 1930s high society England. Even Tony, for whom the reader feels the most sympathy, is shallow and too comfortable to ever consider leaving home until he is shocked into doing so by his impending divorce. Brenda, of course, is horrible. Not only is she cheating on her devoted husband; she cares so little for their young son that she expresses relief when she hears of his death, because she initially feared she was learning of the death of her lover.

The final third of the novel, in which Tony struggles through the South American jungles, seem a departure from the rest of the novel; but this section underscore how  much Tony's life has been turned upside down by the betrayal of a frivolous wife.

Evelyn Waugh's talent for satire is on full display in this A Handful of Dust. He mocks the English upper class, exposing many of them as frivolous, selfish, and cold-hearted.

This was an uncomfortable novel for me. Tony reminded me too much of my younger self, when I placed trust in someone I should not have. When I was betrayed, I was paralyzed by my own indecision, waiting for her to come to her senses. Like Tony, I was too focused inward and on my past and on my own comfortable routine to recognize what was happening and to prevent it. Tony's quest ended when he ran far from home, placing his trust in an incompetent explorer - a decision that cost him his freedom and his life deep in the Brazilian rain forest.

Hopefully, I am now smarter and have learned better than Tony how to control my own destiny.