"A House for Mr. Biswas" by V.S. Naipaul 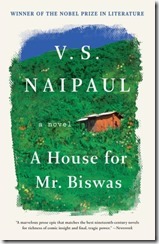 Misfortune followed Mr. Biswas his entire life. He was born slightly handicapped and grew up weak in body and spirit. When he was a boy, his father accidentally drowned as a result of his negligence. He was sent to live first with a craftsman, then with an abusive uncle and each stay ended disastrously. As a young man, his flirtation with a local young lady is misinterpreted as a proposal and he is pressured by her family into marriage. From that moment on, he finds himself dependent on the wealthy Tulsi family - a dependence he comes to bitterly resent.

A House for Mr. Biswas by V.S. Naipaul takes place before and during World War II among the east Indian community of the West Indian island of Trinidad.

The house that Mr. Biswas craves is a symbol of his freedom and independence - evidence that he will no longer rely on others for shelter or status or anything else - and for the respect that will accompany that independence.

The reader wants to pity Mr. Biswas, but it is often hard because so much of his pain is self-inflicted. He alienates everyone around him with his rages and his pettiness. The book must have been painful for Naipaul to write, as the title character is based on his own father. At times, it was painful to read as I recalled the times in my own life when I acted against my own best interest out of anger or spite.

There isn't much action in this book and Naipaul removes suspense by revealing the ending in the prologue; but he makes it work for several reasons:

He builds characters that the reader can care for, even if they are not likeable.

His prose and dialogue are wonderful - sometimes tragic; often humorous.

He weaves together large themes, such as the changing cultures in a post-colonial world and the conflicts of toxic relationships.

A House for Mr. Biswas is an excellent story of a limited man struggling to free himself.