"A Passage to India" by E.M. Forster 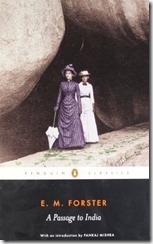 Aziz was a doctor and a father and a widow living in central India during the time of British colonization.

He was friendly and open with the English people and become close with some of those visiting, including the elderly Mrs. Moore, Adela Quested, who was engaged to Mrs. Moore's son, and Cyril Fielding, who ran a nearby government college. One day, Aziz invited some of his new friends to explore nearby caves.

During their spelunking expedition, Adela and Aziz were separated. Adela became disoriented inside a cave and later accused Dr. Aziz of trying to rape her.

Aziz's guilt was assumed, and the trial began quickly.

In A Passage to India, E.M. Forster focuses more on his characters than on the action of those characters and the most interesting character in the novel is Dr. Aziz.

Falsely accused by one he trusted and to whom he showed kindness, Aziz re-evaluates his attitude toward the British colonizers.

The novel explores the difference between the cultures and the attitudes of the English and Indians. It shows the bigotry inherent in colonialism, particularly (but not solely) among the English. Sometimes that bigotry is explicit, as many English consider themselves superior to the Indians - or any darker race, for that matter. Sometimes, it is more subtle, as when the English authorities and population are more likely to believe the false accusations of Adela, even before the trial begins.

The book explores whether personal friendships can exist under the shadow of colonialism. Aziz's opinion on this subject changes, after he is falsely accused.

A Passage to India is a beautifully written novel that makes the reader feel for the characters and think about the relationship between people, countries, and races.