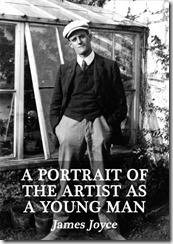 A Portrait of the Artist as a Young Man is James Joyce's somewhat autobiographical novel. Joyce channels his own childhood and young adulthood through the character of Stephen Dedalus.

The book recounts young Stephen's school years, where he passes through a number of phases. He is at first intimidated by the older students, teachers, and priests at his school, struggling to fit in; later, he pursues the carnal pleasures of life; a sense of guilt turns him away from this life and he considers becoming a priest; after deciding against this, he begins to reject all society's values he grew up with and escapes to a life as an artist. These are major swings in a short time, but they are during his formative years, when Stephen is deciding who he will become. In the end, he turns away from the faith of his youth because so much of it was based on fear of damnation and a rejection of worldly pleasures, and he could not reconcile that with a love of beauty. In doing so, he rejects everything he knows to begin anew in a foreign place.

I don't know how much of Portrait applies to Joyce's own life, but he makes the novel personal, bringing us inside Stephen's mind as he struggles with his conflicts.

If you like books with a lot of action, skip this one. But if you like poetic writing and insights into the evolution of a philosophy, this book may be for you.