"A Wrinkle in Time" by Madeleine L'Engle 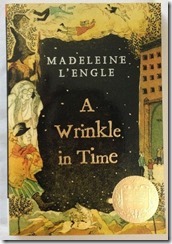 It is a strange experience to read a book twice with a gap of nearly 50 years between.

I think I was in fourth grade when I first read A Wrinkle in Time by Madeleine L'Engle. This week, I read it again.

I enjoyed this book as a boy, but I didn't remember many of its details. I didn't recall the book's ending, but I recalled the characters and a few scenes here and there. This re-read was like visiting an old friend. I would read a passage and remember its effect on 9-year-old me. I believe this was the first time I heard the idea of more than 3 dimensions in the Universe and that one could consider time as a fourth dimension.

"A Wrinkle in Time" is the story of the Murray family. Mom and Dad are brilliant scientists and their four children are all brilliant, but some have quirks. Meg is an outsider, who struggles to fit in at school. And Charles Wallace is a 5-year-old with the mind of an adult, even though the rest of the town believes him to be mentally handicapped because he seldom speaks in public.

Meg and Charles - along with their new friend Calvin - set out to find their father, who has been missing since he set out on a secret government mission years ago. They are assisted by 3 mysterious ancient women. Their journey takes them across time, space, and dimensions, where they encounter other sentient races and an evil force determined to conquer the universe.

It is an adventure and a morality play, involving a galactic struggle of Good versus Evil. It's a delightful story with a good characters and imaginative worlds.

The ending is a bit rushed, but the journey is very rewarding.

It was a rewarding adventure for me to read this book twice with a gap of almost 5 decades between. I look forward to reading it again in another 50 years.