"All the King's Men" by Robert Penn Warren 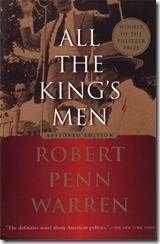 All the King’s Men by Robert Penn Warren tells the story of Willie Stark - a southern country lawyer who beat the system and became Governor.

Stark began as "Cousin Willie from the country". His first entry into public life was to fight against a back-room deal that handed a school construction project to an undeserving contractor - a deal that resulted in the deaths and injury of dozens of children when a fire escape collapsed a couple years later. Willie continued his fight against the political establishment and eventually became governor. But, as he accumulated more power, he lost the idealism of his youth. Eventually, he became known to all his associates as "The Boss".

Willie was charismatic and popular because he championed the common man. But he was also brutal and would not hesitate to destroy his enemies. He often resorted to bullying, bribery, and blackmail to accomplish his goals and maintain his power. He built and presided over his own political machine.

Eventually, Willie encounters problems against which he is powerless.

But All the King's Men is not just the story of Willie Stark. It is as at least as much about Jack Burden - Stark's friend and right-hand man and the narrator of Warren's novel. Like Willie, Burden abandons his ideals as he carries out Willie's plans - ignoring the consequences of his actions.

And the book is very much about the consequences of actions. Neither man has trouble rationalizing his choices. Stark believes that the ends justify the means - that it is ok to accumulate power by any means necessary because he is doing good with that power. He is convinced there is only evil in the world, so he must use that evil as a tool to make good. Stark is not a bad man. But, in his quest to do good, he ends up causing bad things.

Burton, in contrast adopts a nihilistic attitude in which he ignores any results of his action. He lives much of his life through Willie and abandons his own sense of responsibility.

Even many of the minor characters in  the novel compromise their principles at least once - invariably with negative unintended results.

This is a novel about the corruption of power and the hypocrisy inherent in American politics and the consequence of using the end to justify the means and the limits of that power once obtained. Although written in 1947 and chronicling a fictional southern state governor (presumably based on Louisiana governor Huey Long), one can find parallels in the current administration.