"An American Tragedy" by Theodore Dreiser 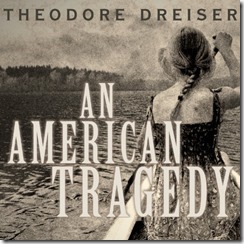 At the age of 21, he finds himself working for a rich uncle who owns a shirt company. He is the boss of a department filled with young ladies and, despite company rules expressly forbidding such things, begins an affair with one of them - the beautiful Roberta Alden. He is also welcomed into the social circles of the local aristocracy, where he is liked for his good looks and charm. Soon, he meets rich, beautiful Sondra and decides he loves her instead of Roberta. Unfortunately, he continues to sleep with Roberta; and, when she becomes pregnant, he is left with a dilemma: marry the girl he no longer loves or abandon her for Sondra, risking exposure for his philandering. It is at this point that Clyde contemplates murder.

Clyde sounds like a terrible person. Who would treat people like this and place his own ambitions above the very lives of others? But An American Tragedy by Theodore Dreiser does not begin with Clyde's entry into high society. It begins with his childhood in Kansas City, where Clyde was the eldest son of street evangelists. Poor and embarrassed, he finds work as a hotel busboy, which puts some money in his pocket. He begins spending his evenings squandering his salary on booze and prostitutes. After being exploited by the selfish gold digger Hortense Briggs, who manipulates him into buying her expensive gifts, he develops a mistrust of women. At one point, Clyde is a passenger in a stolen car that is involved in a fatal hit-and-run. Fearing arrest, Clyde flees Kansas City and changes his name. By doing so, he learns that he can avoid responsibility and punishment by running away.

Each stage of Clydes's life reinforces in him his desire for material wealth and social standing. He becomes more self-centered with each passing year - not evil, but with little empathy toward others.

The book ends with a murder trial, a thorough analysis of one of the book's central tragedies.

There are side stories: the office of the ambitious district attorney that has no qualms about manufacturing evidence; the mother who refuses to acknowledge the possibility that her son might be guilty; the virginal Roberta's agonizing choice to give herself to Clyde or risk losing him; and Sondra, whose parents disapprove of her relationship with a boy they see as lower in social ranking.

But mostly, this is Clyde's story. And the reader cannot help but sympathize with him, even though his problems are almost entirely self-inflicted. Clyde is a product of his experiences. He has been conditioned by society to want what others have, and he doesn't have the courage to question this.

Dreiser removes much ambiguity by telling the reader explicitly what is in the mind of each character as they are speaking. With Clyde, the ambiguity remains because Clyde himself does not understand his own emotions.

There are three deaths in the novel. And, although each is tragic, the real tragedy of the story is the slow descent of Clyde's conscience. He never sees himself as evil, but he falls for the material comforts, and the pretty girls, and he comes to believe that he is entitled to these things and that his desires take precedence over the needs of anyone else.

An American Tragedy is not perfect. It's longer than it needs to be, and it moves slowly at times. But it is a good crime story; a good legal drama; and a very good psychological analysis of a misguided mind growing up under the influence of American values.