App of the Week - Tweetium

I've never found a Windows 8 Twitter client that I like (I've been using the default web site or the in-browser Tweetdeck), but I've been giving Tweetium a try and I like it. It allows you to view your timeline; "Connect" tweets - directed about or to you; "News" tweets - tweets on popular topics; Direct Messages; and each of your Lists. The interface is intuitive and I displays many tweets at once, including attached twitpics.

Today's "News" section features tweets about comedian Harold Ramis, who passed away yesterday, including many by his friends.

My favourite feature is when you click an embedded hyperlink, it launches Internet explorer in two-thirds-screen docked mode, but keeps Tweetium on left third of the screen, so you can still see your tweet and maintain your current position in the Twitter list.

I'm testing the free trial version, but you can upgrade to the full version for $2.99. 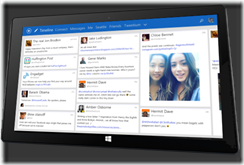