"Arrow of God" by Chinua Achebe 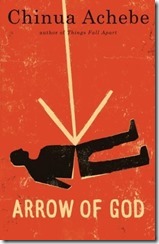 Arrow of God is part of Chinua Achebe's African Trilogy. Although it is Achebe's third novel, chronologically, it is second in the trilogy. The first book - Things Fall Apart - took place as the English colonizers were arriving in west Africa; book 2 - No Longer At Ease - takes place near the end of the colonization period; and "Arrow of God"'s story happens in the 1920's - at the height of European colonization.

Unlike the first two books, this one does not focus on Okonkwo or his descendants.
Arrow of God tells the story of Ezeulu, a high priest of the god Ulu in colonial Nigeria. Ezeulu's tribe goes to war with another tribe - a result of a perceived insult and a dispute over land ownership. The British governor steps in, ends the conflict, and burns everyone's guns. It is this assertion of control by the British over the local population that is at the heart of the novel.

The British are in Africa to implement their legal system and their culture and their religion on the native population and they use any means to do so. They implement "Local Rule", installing an African in a position of authority, but controlling that man so he works in their interests.

The British government bureaucracy makes them terribly inefficient, making their job harder; but the infighting among individuals, villages, and tribes of the Africans makes them easier to manipulate. As part of England's efforts at influencing the local population, missionaries are trying to convert the natives to Christianity. Many resist this change in culture; but they are aided when a failure of the yam crop leads to famine and praying to the god Ulu does not help. The religious conversions are a microcosm of the colonizers' efforts to implement their culture on the Africans, subsuming the existing culture.

Ezeulu stands in the center of it all. He wants to better understand the British and sends his son to work with them to gain more information; but he rejects their offer to make him a Local Ruler. Still, his own people are suspicious of his motives, feeling he has given too much to the white invaders. There is conflict between Ezeulu and

Arrow of God is the story of conflict and influence; of people trying to hold onto their traditions in the face of a tidal wave of change; and of the hope on which people place their faith; of how culture was supplanted in a short time. It is the story of toe loss of the Igbo cultural identity.

Achebe was probably the first English language writer to portray events in Africa from the point of view of the Africans.

The book is told in an eloquent style, peppered with many African proverbs. This one sums it up best:

"When brothers fight to death a stranger inherits their father's estate"