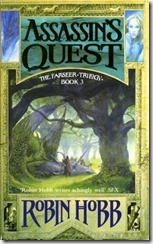 It also the book with the most action.

Royal bastard Fitzchivalry Farseer was executed by his Uncle Regal, who has usurped the throne from its rightful heir. He escaped by using his Wit power to transfer his consciousness to his wolf-brother and living as a wolf for weeks. Fitz's allies manage to return his soul to his exhumed body following the execution, but he is become more wolf than man and struggles to resume his old life or to fight for his kingdom.

King Shrewd and King-In-Waiting Chivalry (Fitz's Father) are both dead.  Verity has left the kingdom to seek the help of the legendary Elderlings, hoping they can rescue his kingdom from the attacking Red Raiders.

Fitz has 2 quests in this story - the first to find and assassinate King Regal and the second to find his Uncle Verity in hopes he can restore order to the kingdom.

Most of this book follows Fitzchivalry's odyssey across the world, seeking Verity and the dangers he encounters along the way. He is reunited with The Fool - a jester he befriended during his days at court. The Fool reveals himself to be more than he showed before and they seek Verity together.

This is the most complex and most satisfying of the 3 Farseer novels. The storylines weave in and out as Fitz travels across the world and out of his own kingdom. Magical powers are used just enough to keep them plausible in this world; but not so much that they are an easy escape from any danger.

Assassin's Quest completes Fitz's transition to manhood and brings the story of Regal's power grasp to a conclusion. The ending felt a bit rushed, but Hobb managed to tie up each of the plot lines. Overall, I very much enjoyed this series.