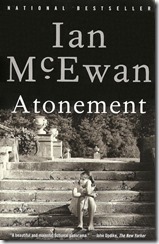 Cecilia Tallis and her Robbie Turner were making love in the Tallis family home when Cecilia's 13-year-old sister Briony saw them. Later, Briony witnessed the rape of her cousin in the darkness outside their home.

Despite getting no good look at the rapist, Briony's overactive imagination and her desire for attention lead her to wrongly accuse Robbie, sending him to prison.

This is the setup of Atonement by Ian McEwan.

It is the story of an aristocratic English family torn apart by a scandal and lives ruined by a lie and the lifetime of guilt that comes with the telling of the lie.

The book follows the 3 main characters at various points in their lives, following the initial scandal. World War II breaks out and Robbie enlists in the infantry after he is released from prison, while Briony and Cecilia work as nurses. McEwan gives us a look inside their heads (particularly Robbie and Briony) and how the incident affected them. The images of the war in Europe and the hospitals in England are particularly intense.

A final chapter takes place decades later with an aging Briony returning to the family home. Here we learn that the story is even more tragic than we originally believed.

The atonement itself is less satisfying than most readers will hope for. But Atonement the novel is a very good story of psychology and pain and guilt.