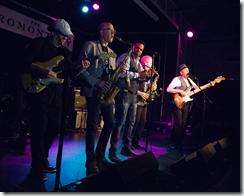 The Average White Band are anything but average.

45 years ago, a group friends in Dundee, Scotland got together to play funky music, then moved to America to launch a recording career.

Saturday night at the Promontory in Hyde Park, two of those original Scottish band members - Alan Gorrie and Onnie McIntyre - joined with 5 newer band members to prove they still have the magic that launched an international career decades ago. 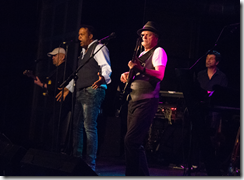 I attended the second of their two sets, where they played a few ballads mixed in with their signature funk. Vocalist Brent Carter, formerly of Tower of Power, showed impressive range for the band and tenor saxophonist Fred Vigdor led the 2-person horn section. They were helped along by alto saxophonist Cliff Lyons, drummer Rocky Bryant, and keyboardist Rob Aries. But it was Gorrie who led the way with excellent bass playing, backing vocals, and a charming persona for the audience.

They played many of their hits, such as "Cut the Cake", "Work to Do", and "Oh Maceo". The room was full and the level of energy rose as as the show went on. The band returned to the stage for a single encore - their only US #1 single "Pick Up the Pieces".

By the end of the evening, most of the audience was on their feet, including yours truly. It was a show I wish could have continued for longer into the night. Despite their name, Average White Band was exceptional. I find myself playing AWB and other funk bands as I write this on Sunday evening.