Aral and Corelia Verkosigan have just married and returned to Aral's home planet of Barrayar. They are looking forward to Aral's retirement and to raising a family. But the Emperor is dying and Aral is forced back into service as Imperial Regent until the heir to the throne - 5-year-old Gregor - comes of age.

They quickly find themselves trapped in the political machinations of the Barrayaran Empire and of those scheming to gain power vacated by the dying Emperor.

And then, a group of Barrayaran noblemen attempt a coup.

Barrayar is Lois McMaster Bujold's sequel to her first novel - Shards of Honor. It concludes the story of Cordelia - former adversary and now wife of Aral Verkosigan. At the end of the story, Miles Verkosigan is born. Miles is the character upon which much of this series of books revolves.

But for now, we focus on Miles's mother Cordelia - a woman caught in a revolution that she did not plan for. She is the strong female hero often lacking in science fiction stories. And Bujold builds her character well - from her distress at her new environment to her fight to save the life of her unborn handicapped son to her role in battling the traitors trying to usurp power for themselves. We see her as a full person complete with weaknesses to soften her and the strength to overcome those weaknesses.

But the novel isn't just about character development. A Civil War, multiple assassination attempts, and a quest to rescue a princess provide plenty of action.

Barrayar is an excellent follow-up to Shards of Honor. 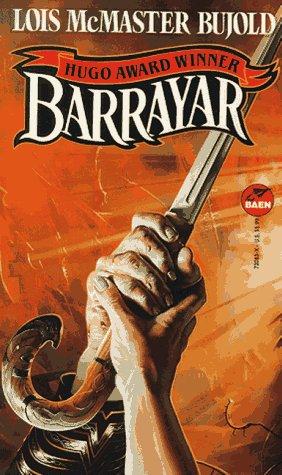