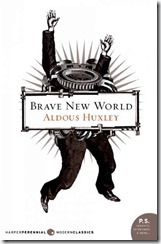 Throughout history, many societies have enforced a caste system, kept in place by either top-down authority or socialization that convinces people it is the proper order.

In Aldous Huxley's dystopian future, the caste system is maintained by defining each individual's level prior to his or her birth and conditioning that person to accept that level. The conditioning begins immediately after birth with repeated messages and chemicals to influence what environmental conditions they will like or detest. Some conditioning even occurs before birth. Embryos destined to perform menial labor are poisoned enough to stunt their mental capacities, so they will not aspire to more.

The casts are labeled with the first 5 letters of the Greek alphabet: Alpha, Beta, Gamma, Delta, and Epsilon. At the top of the system are the Alphas, who enjoy a relatively large amount freedom. At the bottom are the Epsilons, who perform the most menial tasks.

All the people are kept distracted by mindless entertainment; by the encouragement of promiscuity; and by the consumption of euphoria-inducing drugs.

Everyone in this Brave New World accepts their level, because they have been conditioned since birth to do so. Well, almost everyone.

Alpha citizen Bernard Marx recognizes that humans have sacrificed elements of their humanity for a general feeling of contentment. He resents the shallowness of everyone around him. Of course, he is shunned by his peers for this.

When Bernard travels to an Indian reservation (now called a "Savage Reservation"), he finds a society outside the drug-numbed control of the government. He also finds Linda - a former Beta woman trapped in the reservation years ago when she was separated from her Alpha companion. Linda now has a son John, the offspring of her and her Alpha. John who knows he is different from the other reservation children, but he has nothing to which he can compare his life. Linda and John are ostracized by the people of the reservation. Linda's promiscuity is at odds with the beliefs of the locals. The women hate her for sleeping with their husbands and the men ridicule her, but still have sex with her.

Bernard brings Linda and John back to his world, where conflict results almost immediately. Linda retreats into the escapism of the freely-available drugs; John falls in love with a woman but is repulsed by her aggressive sexual advances.

For such a short novel, Huxley packs a great deal.

Religion and God have been abolished; yet, people revere Henry Ford as a god-like figure. He is given credit for the technological advances that brought society to its current state. People have common expressions like "Our Ford" and "His Fordship", and they long ago converted all crosses into T's in honor of Ford's famous Model T car. They have even convinced themselves that Sigmund Freud was a pseudonym for Henry Ford, giving him credit for all of Freud's psychology writings.

It's not surprising the government has encouraged the worship of science over worship of God. All science is controlled by the government and released or manipulated to maintain contentment among the populace.

And that is what Brave New World is about. The people have chosen contentment and happiness over liberty, freedom, individualism, free will - anything that would make them human and allow them control over their own lives. Those in power support this to maintain their power. Authority is maintained by distraction, rather than by force.

In this world, people and entertainment are mass-produced. People seek contentment, but never challenge themselves and the government likes it that way. Citizens question nothing because they are distracted by sex and drugs and mindless media.

There is no love; No marriage; No families; No commitment. There is only a seeking of pleasure and most have accepted that. Art, literature, and philosophy, and religion are gone. Even science is stunted by the goals of those in power. Labor saving devices are suppressed if they would provide too much leisure to the working class.

We see some of this today. People ignore abuses of the government if the stock market rises.
Mind-numbing reality shows and situation comedies and other recreations fill our free time and distract us from thinking about the real problems of the world.

It is this idea of the struggle between individual liberty and acceptance of society and its rules that form the focus of this book. It is about how the state can influence us without our knowledge.

The characters and the story are simply a mechanism for driving home this concept. The reader expects that Bernard will be the story's hero, because he questions the morality of the order of this world early in the book. But eventually, Bernard embraces society's mores when his fellow Alphas finally praise him for bringing John the savage for them to ogle. In the end, it is John who provides an outside perspective on the dominant society of Brave New World.

Brave New World is often compared with 1984, written by Huxley's contemporary George Orwell, who also predicted a dystopian society controlled by the state. But Orwell's government ruled through fear, while Huxley's overlords ruled by keeping the people happy and distracted.

I found Brave New World a chilling parable of society that could exist - a world that in many ways we are heading toward now.

"And that," put in the Director sententiously, "that is the secret of happiness and virtue–liking what you've got to do. All conditioning aims at that: making people like their unescapable social destiny."