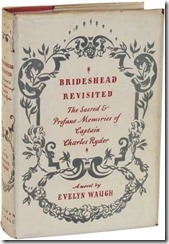 In his first year at University, Charles Ryder meets Sebastian Flyte and is immediately attracted to him. Sebastian is handsome, rich, charming, and carefree and the two of them quickly become inseparable, drinking together at every opportunity.

Sebastian invites Charles home to Brideshead Castle. Sebastian describes the palatial estate as "It's where my family lives". Despite the barriers Sebastian erects between himself and his family, the Flytes almost immediately accept Charles as one of their own.

The family is an interesting mix of characters - the beautiful and intelligent Julia, who looks and sounds much like Sebastian; the idealistic Cordelia; the strong and pious mother Lady Marchmain; and the father Lord Marchmain, who abandoned his family to live with his mistress in Venice. Sebastian spends much of his time at home drinking to excess, despite his family's efforts to prevent him from doing so.

Eventually, Sebastian's drinking becomes so severe that his family has no idea how to help him; and he leaves home, largely exiting the story except in secondhand reports.

But Charles and the Flytes remain and Brideshead Revisited by Evelyn Waugh is their story.

The Flytes are very wealthy and part of the upper social strata of English aristocracy. But they are also Roman Catholic, which is a rarity in Anglican England and which affects both how they view the world.

The story follows Charles through 3 phases of his life - framed by a wartime visit to an abandoned Brideshead, which sparks his memories of his life with the Flytes.

In Part 1 ("Et In Arcadia Ego"), Charles and Sebastian meet and form a very close relationship. Some critics have described this as a homosexual relationship. I'm inclined to believe it is not because Waugh never mentions anything physical between the two and he does explicitly introduce other homosexuals into the narrative. Regardless, Sebastian and Charles become close enough that they end up spending all their free time together and eventually stop seeing their other friends - a pattern into which romantic couples often fall. There is no question of the love they feel for one another. It is in this part that Charles begins to bond with the Flyte family.

In Part 2 ("Brideshead Deserted"), the characters drift apart. Sebastian is an alcoholic and has left the family and traveled to Africa. Charles marries and becomes a successful painter. The other Flytes go out in the world, seeking careers and love. It concludes with Charles reconnecting with and falling in love with Sebastian's married sister Julia. Each agrees to divorce their spouse to be free to marry one another.

In Part 3 ("A Twitch Upon the Thread"), most of the family returns to Brideshead, including the dying Lord Marchmain and deal with their changing lives. The Catholicism of the Flyte family takes center stage in this section, particularly when contrasted with the agnostic Charles and Lord Marchmain.

Brideshead is about the English idle rich between the world wars; about the British caste system; about the decline of the aristocracy; about personal responsibility; about religion and its influence on moral choices; about sexuality; and about love and friendship.

Charles is an outsider in the aristocratic world of the Flytes; but he is not a dispassionate observer. He injects himself fully into the family and they embrace him. Some even love him. But the family is filled with drama and conflict. And Charles becomes part of it.

Most of the characters deteriorate as the novel progresses. Even Brideshead Manor itself falls into disrepair as the family abandons it to pursue interests elsewhere. In the beginning, most characters possess the optimism of youth; but, by Part 3, they have either aged poorly, become disillusioned, or squandered their lives as a wandering alcoholic. Still, there is optimism in this novel. And some are at least partially saved by an epiphany and a religious conversion late in life.

Brideshead Revisited is a complex story that reminds us that life is a journey that takes us both forward and backward and that we have control over where it takes us. It is a personal story told by Charles and his recollections force him at last to reconsider his life.