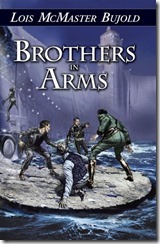 For years, Miles has been leading a double life - he was born Lord Miles Vorkosigan who became a lieutenant in the army of the Barryaran empire; but he sometimes assumes the role of Admiral Naismith, leader of the  Dendarii Free Mercenary Fleet.

One day, Miles is forced to appear on the same planet as both of his persona on the same day. Fearing his cover will be blown, he invents a story that Naismith is actually Miles's clone.

Shortly afterward, Miles discovers that he actually does have a clone and that this clone is being used by his enemies in a plot to assasinate Miles.

The book is a good adventure story. It advances the relationship between Miles and Elli (his bodyguard / lover); and it addresses a glaring plot problem - Miles disguises himself as a mercenary Admiral despite his unique physique. It also takes place on future Earth, which is a bonus for those of us who call Earth home today.