Building and Running a Docker Container

A container allows us to virtualize applications and data and host this on top of a host virtual machine.

Docker is a tool designed to manage containers.

So, before you create a container, you must create an image and tell it what components will be in the container.

You will also need an account at an online registry, such as Docker Hub or Azure Container Service. In this article, I use Docker Hub.

Once you have everything installed and set up, we can walk through the steps listed above.

I created a simple node.js application, consisting of only a single file: app.js with the following code:

This simply outputs some HTML on port 8081. When run, it will display some text, the current date/time, and a list of numbers.

In the same folder, I created a file named "Dockerfile" (with no extension)

Dockerfile supports many instructions, but I have kept this one simple, as shown below:

FROM tells Docker which image to begin with. The node:current-alpine is a Linux container with the latest version of alpine node installed. You can find a list of pre-built images at https://hub.docker.com/search

LABEL is optional. We use it to add metadata to our image, as a name/value pair. Adding the author is common.

WORKDIR tells Docker to set the current working folder in the container.

COPY tells Docker to copy files from a folder on my location machine to a folder in the container. The first "." represents the current folder and the second "." represents the working directory in the container, so my command tells Docker to copy all files in the current folder (where Dockerfile is located) to the working folder.

ENTRYPOINT is a command or executable to run to start the container, along with any arguments, separated by commas.

You can read all about the tags in Dockerfile here.

We build an image from the files in the current folder with the following command:

where image_name consists of three parts: the Docker registry name, the Docker repository name, and a tag (which is often used to define the version), using the following format:

I have a registry on DockerHub named "dgiard", so I can use an image name like the one below to identify version 1.0 an image in my registry in a repository named "myapp":

After creating an image, we can push it to a registry with the following command:

Of course, we need write permission in the registry before we can push an image to it. If we are using DockerHub, we may need to log in first.

Once it is in the registry, we can run it from any computer with access to the registry via the following command:

In our example above, the command to run a container locally becomes:

We can test our app by opening a browser and entering the following in an address bar:

This should run the application, as shown in Fig. 1. 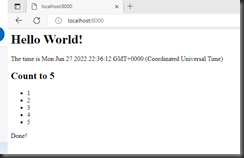 This article showed how to create a Docker image; then, build, push, and run a container based on that image.

Here are the key Docker commands we executed for our example: