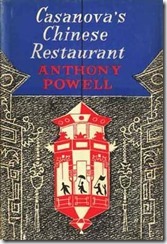 The fifth novel of Anthony Powell's A Dance to the Music of Time is the darkest so far in the series.

Powell bookends his story nicely with a visit to

The novel begins with a flash-forward to a woman singing near a bombed-out restaurant in war-torn London, which reminds narrator Nick Jenkins of a dinner years earlier with the now-deceased Mr. Deacon, musician Hugh Moreland, music critic Maclintick, and other English bohemians at the Italian-turned-Chinese restaurant named Casanova's Chinese Restaurant, which is also the title of this book. During the flashback, the group discusses marriage, seduction, suicide, and other topics that become relevant later in the novel. The conversation is recalled near the end when one of the group of friends kills himself, following the destruction of his marriage.

Earlier books in the series presented relationships and marriages that failed for various reasons, but CCR presents one particularly dysfunctional relationship in which the couple bicker constantly - often to the embarrassment of those around them. The situation is at first amusing but leas to a tragic end.

Characters from previous novels make appearances. The eccentric Erridge has disappeared to fight in the Spanish Civil War, only to return at the story's conclusion. And Nick's school friend Stringham shows up unannounced and drunk at his mother's party.

Again, the narrator's life takes a back seat to those around him. Nick's wife miscarries their child, but that event is glossed over and only seems a reason to run into Morland at the hospital and more attention is devoted to the     birth and death of Morland's child.

This book is darker than the first four with its suicide, infidelity, alcoholism, and divorce. But it is not without its humor.