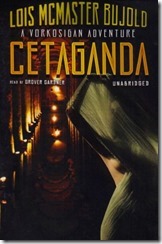 Mile Vorkosigan and his cousin Ivan of the Barrayar Empire attends the funeral of the empress of the rival Cetagandan Empire.

Shortly after landing, they are attacked by a Cetagandan servant and wrestle away a mysterious artifact. When the servant turns up dead shortly afterward, Miles and Ivan must figure out who is behind the murder, the theft of the artifact, why is the artifact so valuable, and the political plot they ultimately uncover.

Like all of Lois McMaster Bujold's novels, Cetaganda" combines action, political intrigue, and character development.  This one is primarily a detective story with Miles and Ivan uncovering clues that help them uncover the answers to the questions above.

This novel introduces the Cetagandans and provides details about their culture. It was written later than other stories that feature this race/empire and I'm told it helps to better understand their motivations.

Bujold has a talent for building rich characters and adding layers in each novel. In this story, we get a deeper look inside the mind of the carefree, womanizing Ivan and see the reaction of Miles, who is less smooth and less attractive due to his diminished size and birth defects. It's easy to cheer for Miles the underdog, despite the privileges being born to royalty.