Chicago Rocks, thanks to Mott the Hoople

Yeah, it's a mighty long way down rock 'n' roll!
As your name gets hot so your heart grows cold!
And you gotta stay young man, you can never be old!
All the way from Memphis!

In 1974, Mott the Hoople recorded and released a live album, probably without realizing it would be their last. Ian Hunter's decision to pursue a solo career led to the band's breakup a few months after the album's release.

In 2019, the surviving members - guitarist/vocalist Hunter, keyboardist Morgan Fisher, and guitarist Ariel Bender - reunited to tour North America. Wednesday night, that tour landed at the Chicago Theatre and a legion of gray-haired and graying haired fans came to pay tribute.

The opening act was The Suburbs - a pretty good band from Minneapolis, whose music sounded like the synth-heavy, horns-enhanced music of 1990s MTV. The singer joked "As you can tell, we are very young", even though gray hair sat atop the heads of most of the band members. They filled a pleasant 40 minutes.

Around 9PM, the stage darkened, and the recorded music of Gustav Holst filled the theatre as Mott the Hoople marched onstage. The spotlight shone on Hunter and Fisher, who performed an acoustic version of the opening of Don McLean's "American Pie". After the line about "the day the music died", Hunter asked: "Or did it?" and the rest of the band launched into an energetic version of "The Golden Age of Rock 'N' Roll". They had begun the concert exactly as they had begun the 1974 tour!

For almost 2 hours, this trio and the five others in the band entertained a theatre full of aging rock fans. The band consisted of keyboards, guitars, bass, drums, and one virtuoso, who kept switching instruments. 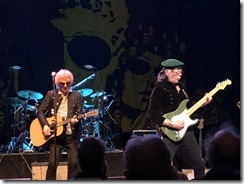 Through power rock and rockabilly and ballads, the band kept the audience on their feet, singing along and cheering on the heroes of their youth. Mott the Hoople was known for great originals, like "All the Way from Memphis" and covers like Lou Reed's "Sweet Jane" and they played plenty of both on this night. Other highlights of the night were "I Wish I Was Your Mother", "Roll Away the Stone", and "Walking with a Mountain", which featured a blistering guitar solo by Bender. For local color, they sang the chorus of Hunter's hit "Cleveland Rocks", replacing the iconic line with "Chicago Rocks" to the pleasure of the locals. On the rock numbers, the band sometimes featured 4 guitar players - not counting the bass guitar.

Of course, they finished the night with David Bowie's "All the Young Dudes" - Mott the Hoople's biggest hit.

It was amazing how much the band sounds the same, despite 45 years apart and vocal chords and fingers that are in their seventh decade. More impressive was how much fun they seemed to be having and how that fun energy transmitted itself to an audience. Band members and audience members connected with one another and for a couple hours, it was as if all the years had not passed and we were all still young fans and rock gods.