Cobham and Brecker inspire a small crowd at City Winery

Maybe it was the rain. Or the fact that it was a Sunday. Or because they performed 2 shows on  the same day.

But the City Winery was barely half full for the legendary drummer Billy Cobham and his Crosswinds Project, which featured his longtime collaborator trumpeter Randy Brecker.

Cobham and Brecker have a long history together. They co-founded the jazz-rock fusion band Dreams in the late 1960s before launching successful careers as solo artists and collaborating with many of the jazz greats. Brecker found great success pairing with his brother Michael as The Brecker Brothers, while Cobham co-founded the Mahavishnu Orchestra with guitarist John McLaughlin.

Sunday they were together again, along with 4 other musicians (guitar, bass, keyboard, and bassoon) at the City Winery. I caught the second of two shows and the band was tight and energetic.

Named for his classic 1974 album, the Crosswinds Project played the full Spanish Moss Suite from that LP, leading in with a beautifully rendered solo keyboard version of "Savannah the Serene". 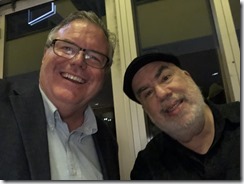 It was Cobham's band and he led the way, but each of his band took turns with outstanding solo and ensemble performances. I was particularly impressed with keyboardist Osam Elelwy, who brought both energy and emotion to the evening's performance.

At 75 years young, Billy Cobham is celebrating his legacy and still sharing continuing to pour himself into his music. It will be tough to match the influence he has had on musicians in the past, but he is still inspiring audiences.