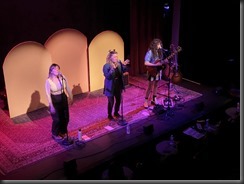 It is unusual for a singer to warm up for her own band; but that is what Natalie Schepman did Friday night at the Old Town School of Folk Music. Schepman is one-third of Joseph - a vocal group from Oregon consisting of her and her two sisters: twins Allison and Meegan Closner.

Natalie had a solo career prior to forming Joseph, so she performed songs from that era, accompanying herself on acoustic and electric guitar, before taking a short break and returning to the stage with her sisters.

Each of the three ladies took turns singing lead on their songs performed throughout their 90-minute set. Their voices are distinct from one another, but each of them possesses an impressive vocal range on their own and together their harmonies are amazing! The only accompaniment came from Natalie's guitar playing, but that was enough.

I learned when I arrived that the show was all-request - fans were encouraged to suggest songs on the group's website and they played only those suggested by the fans. Although I was unfamiliar with Joseph before attending the concert, the crowd was not. Many came wearing shirts with the band's logo and large numbers sang along to the songs. It was a fun atmosphere and at least two couples were inspired enough to get engaged during the concert.

I arrived curious and I came away a fan of this trio.