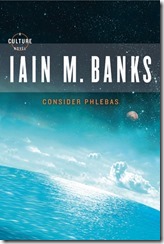 Bora Horza Gobuchul (aka "Horza") is a Changer - a shape-shifter, able to alter his appearance to look exactly like anyone else. He is also a mercenary working for the Indiran galactic empire.

"Consider Phlebas" begins with Horza imprisoned, tortured, and condemned to death by the Culture - a rival galactic Empire at war with the Idirans.

Horza is rescued by the Idirans and given a mission to travel to the planet Schar's World and capture a "Mind" - an advanced artificial intelligence designed by the Culture.

Along the way, he is attacked, ejected into space, rescued by space pirates, captured again, escapes, captures a spaceship, nearly arrested, and he meets other beings who follow him or subvert his mission or fall in love with him or try to eat him. Yes, it's a lot.

On Horza's journey, we encounter bizarre - sometimes hedonistic - societies. He is captured by a cult that worships a morbidly obese creature who eats people alive; and a card game in which the ultra-rich use the lives of poor people as the stakes in the game.

At times, the story seems disconnected as the players jump out of one predicament and into another.

The book's basic formula is a familiar one - a space opera set in the far future in which a lone mercenary takes on the might of an Empire. But there is plenty of action to keep the reader engaged. And plenty of dciverse characters to make the journey interesting.

But Banks does a good job of expressing the moral ambiguity of the universe - both in the main characters and in the two sides of the galactic war.

"Consider Phlebas" is the first of a 10-volume series. It was not enough to convince me to read the remaining 9 novels immediately. But it was good enough that I will consider returning to the series in the future.