Daryl Hall and Todd Rundgren Work and Play Well Together 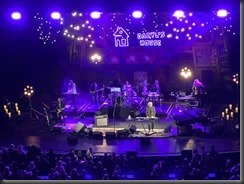 Todd Rundgren, Daryl Hall, and their music were a big part of my life growing up. I saw Rundgren perform at a small club in Newport, KY almost 20 years ago; but I had never seen Hall in concert until Friday evening at the Auditorium Theatre.

Rundgren began the evening, performing for over an hour. He played his biggest hits - "Hello, It's Me", "I Saw the Light", "It Wouldn't Have Made Any Difference", and "We Gotta Get You a Woman", along with some deeper cuts from his five-decade recording career. He also delivered moving renditions of two Motown classics - Smokey Robinson's "Ooh Baby Baby" and Marvin Gaye's "I Want You".

After a brief intermission, Daryl Hall took the stage and brought his energy to a mix of originals from his solo career and songs made famous by other artists. He drew the biggest cheers while performing the music of "Hall & Oates" - a dynamic duo that cranked out hit after hit in the 70s and 80s.

For the encore, Rundgren joined Hall on stage, where they sang together for several songs. 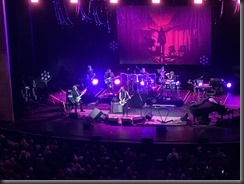 Both bands shared the same backing band - an unusual arrangement for a main act and warmup act. The band was electric - especially the saxophone player, who excited the crowd with his solos. Hall is still a known commodity to mainstream audiences, thanks to his performances on his long-running online show "Daryl's House". He tried to model the stage after the show’s set and kept the atmosphere as relaxed as the show with casual banter between songs. Rundgren still tours and occasionally records but has not maintained the strong public presence of Hall.

Hall and Rundgren are now in their mid-70s, and it is surprising how well their voices have held up. Hall was most famous for his range while singing the soulful melodies as the lead vocalist of Hall & Oates, but Rundgren has always shown great vocal range as well. The years have done little to diminish these skills.

The relationship between these two men goes far back. They both grew up in Philadelphia, they have recorded and toured together before, and Rundgren produced one of H&O's albums. Their closeness was apparent as they harmonized on stage.