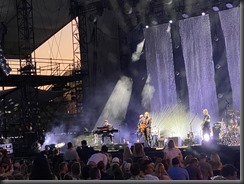 It is not often that a singer acts as his own warmup band. But that is exactly what David Gray did Monday night at the Huntington Bank Pavilion on Northerly Island.

Gray promised to play every track from his classic album "White Ladder" two decades after its release. But before he did so, he and his band performed a collection of his hits. The crowd was small, but they enjoyed hearing favourites, such as "The Other Side" and "You're the World to Me". After nearly an hour, the band left the stage, returning 20 minutes later to perform the album he promised.

True to his word, Gray sang each of the ten tracks in the order they appeared on the original CD. David has a talent for making his live performance sound very much like the studio version of his songs, which delighted the audience. The first two songs: "Please Forgive Me" and "Babylon" brought everyone to their feet. He concluded the set with the final track "Say Hello Wave Goodbye" - a mellower version of a song originally recorded by the synthpop band "Soft Cell".

Gray opened his encore set with another Soft Cell cover - their biggest hit "Tainted Love". The arrangement was close to the original - a style not often embraced.

David then told a story of the week that he performed at the prestigious Glastonbury Festival. It was the same week that "White Ladder" cracked the top 5 in the UK and he and his dad had a chance to meet David Bowie. Bowie was a big star and very gracious to the young upstarts, which prompted Mr. Gray to include two of Mr. Bowie's songs ("Life on Mars" and "Oh! You Pretty Things") in tonight's encore.

This was my first time seeing David Gray in concert. My friend Chris introduced me to his music earlier this year, telling me it was a favourite of him and his wife. I sat with them at the show and felt the emotion and joy that David Gray brings to his audience through his music.