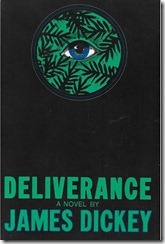 Four middle-class suburbanites decide to get away from society for a weekend. They hope to break the tedium of their daily lives and paddle through the uncharted rivers in the hills of Georgia.

But on the second day, they are attacked, rescued, and further terrorized.

With no one to help them, they take matters into their own heads, resulting in a legal and moral crisis.

This is the scenario of James Dickey's novel Deliverance.

It is a story of survival and suspense and ambiguity and self-doubt; of the power of nature; and the brutality of man.

Dickey does a masterful job shifting between descriptions of the power and beauty of nature and building tension within the story.

I read the book in a single sitting. By the end of the it, I was emotionally drained. Dickey is known mostly as a poet, but this novel takes us on a dark and deadly journey that is impossible to forget. The attack in the book became one the most memorable scenes in movie history, when John Boorman turned the novel into a movie 2 years later.

Set aside some time to read this novel and ask yourself: What would you do in these circumstances?