"Do Androids Dream of Electric Sheep" by Philip K. Dick 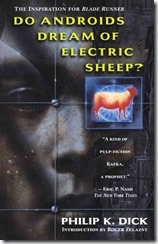 The nuclear fallout from World War Terminus has killed most of earth's animals, left a cloud of radioactive dust across the planet, and encouraged the people of Earth to emigrate to colonies on other planets. Those left on earth need to find a way to survive in a polluted and chaotic world.

The biggest advance that science has brought is the creation of androids - creatures that look exactly like humans and are designed to serve humans on the off-world colonies. But androids lack empathy and sometimes they escape their servitude, kill their human masters, and hide among the humans of Earth.

Rick Deckard is a bounty hunter, tasked with tracking down renegade androids. The police have developed a test to identify androids based on their lack of empathy.

In one 2-day period, Deckard tracks down 6 killer androids and struggles with his own purpose in life.

Do Androids Dream of Electric Sheep by Philip K. Dick tells the story of these two days and Deckard's pursuit of the androids. But mostly it tells of how Deckard and the rest of Earth's people have lost its own humanity. They spend their days using machines to alter their moods and collecting animals as status symbols (or lifelike mechanical animals, if they cannot find the real ones). Deckard himself is troubled by the empathy he feels towards the androids he is hired to destroy.

The story's title refers to Deckard's pet electric sheep that he keeps in order to impress his wife and neighbors.

Dick does a masterful job painting a dystopian society. The post-nuclear-war world is filthy and gray and empty, and people struggle to maintain a sense of normalcy. The world outside is so bland that they use a "Mood Organ" - a mood altering machine to dial their emotions either up and down. They have latched onto a religion, which is based on a VR recreation of a martyr experiencing a stoning; The most popular TV show features Buster Friendly, a goofy host, who holds his audiences in near-religious control.

Dick focuses on Deckard's struggle to find meaning in life. He questions his job: destroying androids for whom he feels empathy. He does it for the money in hopes of making his wife happy with a live animal. But his wife spends her days distracted by the Mood Organ.

Society demonizes androids for their lack of empathy; but many humans lack this same quality: the radioactive fallout caused brain damage in some humans and no one cares about them; And Deckard's years of bounty hunting take their toll on his ability to empathize.

It's worth noting that Ridley Scott's excellent 1982 movie "Blade Runner" is loosely based on this novel, which certainly boosted the book's popularity. But the book is far more cerebral than the movie, exploring themes of religion and human nature and humanity.

"Do Androids Dream of Electric Sheep" is recommended to any fan of science fiction.