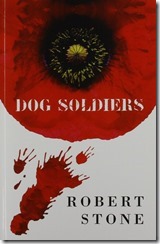 John Converse was once a successful playwright. But his ideas dried up and he found himself working as a correspondent during the Vietnam War. But, even at this job, inspiration escaped him. So, he decided to smuggle heroin into the United States, enlisting his old friend Ray Hicks to transport the drugs to his wife Marge in California.

Things go terribly wrong. The bad guys learn about the drugs and try to steal them. They threaten Hicks and Marge; then, kidnap Converse. Hicks and Marge go on the run, trying to find a way to sell their product and escape their pursuers.

Dog Soldiers by Robert Stone is a thriller with a suspenseful buildup and an exciting climax. But it is also a commentary on the cynicism that swept America after the idealism of the 1960s counterculture. American soldiers are selling narcotics, cops are corrupt, and young people are bored with LSD and trying more dangerous drugs.

Stone intersperses the action with philosophical musings via the inner dialogue of each character. There are moments of humor, of reflection, and of fear.

The thoughts of one character as he slowly dies while trying to escape through the desert is particularly poignant.

Dog Soldiers won the 1975 National Book Award. It is not a classic, but it is an exciting and well-written novel, with enough ideas to exercise your brain.