Elton John is Not Going Gently Into Retirement 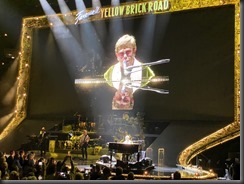 After seeing Elton John perform Friday night at the United Center, I have to wonder how he can consider retiring. The 74-year-old rocker has managed to retain his voice and his piano skills and clearly enjoys performing and receiving the adulation of his fans.

For over two hours, he delighted a full arena with songs from a career that has spanned more than 50 years! He wore his signature sparkly suits and outlandish eyewear, but the props were less flashy than the flamboyant costumes for which he was known in the 1970s.

This tour is billed as the "Farewell Yellow Brick Road" tour - a title with a nod to his announced retirement and another nod to his 1973 smash hit album "Goodbye Yellow Brick Road". He opened the evening's music with "Benny and the Jets" - an enormously popular single from that album.

Elton was joined on stage by guitarist Davey Johnstone and drummer Nigel Olsson, both of whom toured and recorded with him during the early 1970s when he first gained international fame. They and the rest of the band were top-notch - an experienced group of rockers who clearly enjoyed the music they were playing.

Elton and his bandmates played the old songs, such as "Tiny Dancer", "Someone Saved My Life Tonight", and "Rocket Man" with great enthusiasm, as if they had not performed them a thousand times before. And the audience ate up the performances as if they were greeting an old friend.

He opened his encore set with "Cold Heart" for which he noted how good it felt to have a hit at the age of 74. He then moved from his most recent hit to his first one, bringing loud cheers with the opening lines of "Your Song" - a single that charted in 1970! After over 2 hours onstage, he climbed a platform that rose into a door in a simulated starfield and disappeared.

This tour began in 2018 and was billed as his last set of concerts before retirement. But the worldwide COVID epidemic postponed many of the dates; and now that Sir Elton has resumed his tour, he is adding dates to the end.

I get the feeling he does not want this to end any more than we do.