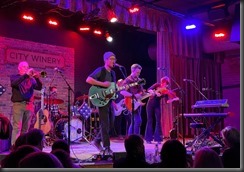 Every band should include bagpipes. And two fiddlers. And a fife and a recorder.

It works for the Canadian Celtic Band Enter the Haggis, who delighted the crowd at City Winery Friday night.

For two hours, ETH played a mix of ballads and rock songs - but mostly of Celtic or Celtic-influenced arrangements. The band originated in Toronto, Ontario 25 years ago, but they made their name by writing and recording songs influenced by the music of Scotland and Ireland.

They delighted the audience with the melodic "Down With the Ship" and the rousing "One Last Drink" and closed their encore set with the upbeat "Shangri-La".

I saw ETH years ago when they performed at the CodeMash conference in Sandusky, OH. After the show, I had a chance to speak with band members Craig Downie, Brian Buchanan, and Trevor Lewington. I was delighted to hear that each of them remembered CodeMash fondly.