A father and son sharing a passion is a wonderful thing.

Sunday night in Chicago, Jason Bonham's Led Zeppelin experience opened for Peter Frampton, where Jason played tribute to his father. Jason is the son of the late Zeppelin drummer John Bonham and he has assembled a group that sounds exactly like his father's band - down to the musical arrangements and a voice replica of Robert Plante.

Bonham's band would have been a great concert on its own, but the main attraction was Peter Frampton, the 69-year-old singer / guitarist, who recorded his first hit at the age of 18 with Humble Pie.

The thing I love about Peter Frampton is that he continued to evolve, without rejecting his past.

Frampton enjoyed his greatest commercial success in the 1970s, culminating with the recording and release of "Frampton Comes Alive" - Rolling Stone Magazine's 1976 album of the year. 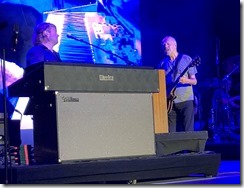 Sunday night in Chicago, Frampton drew extensively from his hits of that era - "Baby, I Love Your Way", "Do You Feel Like We Do", "Show Me the Way", ...), even opening with "Something's Happening", the song that opened his legendary live album; but he also exposed us to much of the new material on which he has been working the past 4 decades. He played from his cover of Soundgarden's "Black Hole Sun" from his Grammy-winning 2006 album "Fingerprints" and several tracks from his recent "All Blues" album.

Between songs, he charmed us with stories of his career and the musicians with whom he has interacted.

His 3-song encore consisted of songs from "Humble Pie", the band he co-founded at the age of 18.

No artist has become more associated with the Talk Box than Peter Frampton and he used it in this show - but sparingly enough that it remained fresh and not just a gimmick to prop up his songs. 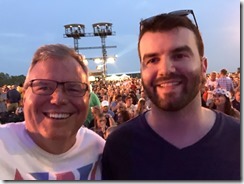 This was Frampton's final tour. He is retiring due to a diagnosed with a degenerative muscle disorder that will ultimately impair his ability to play guitar. But there was no evidence of any health problems at this show. His energy was high, and his playing was flawless. He and his band were on stage for nearly 2 hours.

I was excited to finally see Peter Frampton in concert - decades after originally discovering his music. And more excited that I shared the experience with my 25-year-old son, who seemed by far the youngest attendee.

A father and son sharing a passion is a wonderful thing.