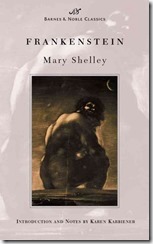 Frankenstein is the story of Victor Frankenstein, a scientist who discovers a way to re-animate dead tissue and uses this knowledge to build a giant, grotesque creature. Victor is repulsed by his creation and rejects it, which angers the creature and inspires him to seek revenge on his creator by destroying those closest to him.

The story of Frankenstein is familiar to almost everyone - primarily through the 1931 movie and the works that it inspired. But the original novel by Mary Wollstonecraft Shelley, published in 1818 offers much that later interpretations do not.

The novel differs from most later interpretations of the story by how much is given to the creature displays complex feelings and motivations. Unlike Karloff's mute, shuffling monstrosity, Shelley's monster was self-educated, literate, and articulate. He feels the betrayal of his maker and the pain of rejection by the world. He takes out this pain by destroying everyone that Victor loves.

In this classic horror novel, Shelley explores the dangers of playing God, the power of loneliness, and the fear of losing all that we love. She even brings in the responsibilities that fathers have for their children - a topic at least as relevant today as it was 200 years ago. Victor Frankenstein is the ultimate deadbeat dad. he runs from his responsibilities, abandoning his offspring when needed most.

There are two evil creatures in this book. Victor shirks his responsibilities and abandons the creature he created, primarily because of its physical deformities. The monster dreamed of love and acceptance; but turned to evil and violence and revenge when he was rejected by his creator and by the world.

Mary Shelley was a pioneer in the science fiction and the horror genres and the longevity of "Frankenstein" is a testament to this standing.