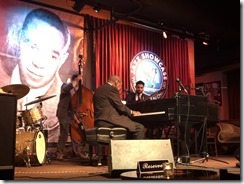 Freddy Cole looked every bit of his 83 years as he was helped onto the stage last night at the Jazz Showcase in Chicago's Printer's Row.

Until he sat at the piano. At that point he was transformed. For an hour and a half, he showed a strength and grace that belied his 8 decades. His command of piano and vocals was a strong as a man half his age.

He launched from one song to the next, never taking a break to chat with the audience until the final few minutes.

Although Cole can claim 3 Grammy nominations, he will always be remembered as the younger brother of legendary singer Nat "King" Cole. But he does not shun that comparison, as his set included three of Nat's songs (Paper Moon, L-O-V-E, and A Blossom Fell) and he recently released an album of songs made famous by his brother. Close your eyes and the richness of Freddy's voice is reminiscent of his late brother's talents.

Cole stuck mostly to ballads, but pleased the local crowd near the end of his set with a rendition of Ray Price's swinging "On the South Side of Chicago", which brought an ovation from his hometown.

His piano and vocals were accompanied by drums, upright bass, and guitar. Of course, the attention was mostly on Cole, but his talented Adam Moezinia took many solos. Bassist Elias Bailey stayed in the background until the last few songs when he became more and more bold with his solos and complex playing. 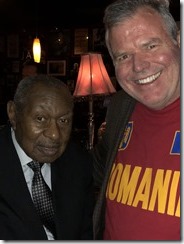 In the end, Freddy Cole closed the set with a song called "Goodbye", accepted a standing ovation, and was helped from the stage, again transformed into a fragile old man. Until the night's second set.