George Clinton and Parliament Funkadelic Tear the Roof Off the Aragon 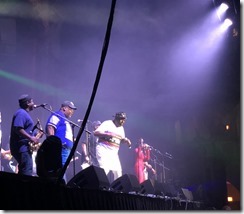 It's a good thing The Aragon Ballroom in Chicago's Uptown has such a large stage. They needed all of it to hold about 20 singers and dancers and rappers and guitarists and horns and drummers that make up George Clinton's Parliament Funkadelic.

But even with its large size, the Aragon stage could not contain the entire band for the entire concert Friday night.   At least three musicians jumped over the front into the orchestra pit and ran out into the audience during the performance.

Many years ago, Parliament and Funkadelic were two separate bands (although with largely the same members), but today Clinton has combined them into a single entity - Parliament Funkadelic. 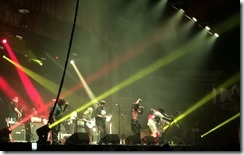 Clinton conducted... no, that's not the right word... Directed...? No... He more or less presided over the band's performance, stepping forward occasionally to acknowledge a performer, deliver a few lyrics, or lead the audience in handclapping. In fact, the 77-year old spent much of the concert sitting on a chair in front of the drum set.

The show started slowly, not helped by failing sound systems and the poor acoustics of the Aragon; but Clinton gained energy as the night went on.

The crowd expressed most delight when the band broke into their old songs - "Give Up the Funk", "Flashlight", "One Nation Under Groove", ...) 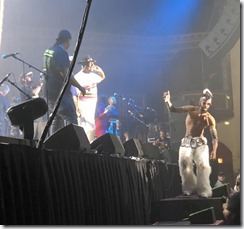 With no seats on the ground floor, the audience could not help but dance, clap, and wave their hands through much of the show. It wasn't perfect, but the crowded stage delivered enough to delight those who made it out for the night.

His health is failing, and his energy is waning, and this will likely be his last tour. But he gave what he could to the crowded ballroom audience, who waited through three warmup acts to see the Rock and Roll Hall of Famer.