"Go Tell It on The Mountain" by James Baldwin 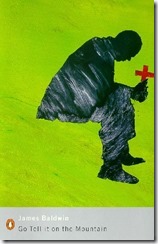 Set against the backdrop of black families and churches in Harlem and in the American southeast during the Great Depression, Go Tell It on The Mountain by James Baldwin takes us through the struggles of a family dealing with God, religion, and temptation, sin, guilt, and redemption.

The story begins ends with John Grimes on his 14th birthday. John is troubled by his relationship with God, which is negatively affected by John's poor relationship with his unloving stepfather - an evangelical preacher at a Harlem storefront church.

Gabriel grew up a wild youth in the south. After years of rejecting God, Gabriel is saved and decides to become a preacher. His idealism helps him, but his weaknesses hinder him. Desperately desiring a son, Gabriel is frustrated at his wife's inability to conceive. He meets Esther at church, who flirts with him. A brief extramarital affair with Esther results in a bastard son, which Gabriel tries to cover up by stealing his wife's money and sending Esther out of town, thus compounding his sin. Like nearly all of us, Gabriel falls short of what he seeks to become; but his greatest weakness is his inability to accept personal responsibility for his mistakes. Consistently, he blames others for his own failings. This hypocrisy hinders his desire for forgiveness - from himself, from others, and from God. As he grows older, Gabriel becomes more bitter and unloving.

The most powerful scene of the novel is when Gabriel finally confesses his illegitimate son Royal to his wife Deborah after learning that the teenage boy has been murdered. Royal never knew his father, but Deborah knew all along. Deborah does not chastise Gabriel for his infidelity; instead, she chastises him for not helping Esther when she needed his aid and for not taking in his infant son after Esther's death and for not accepting the gift that God gave him.

The language of Mountain poetic, mixing references from Gospel hymns and the King James Bible. It is a beautiful story that is well told, even though it describes many ugly things.

Hours after finishing it, I was haunted by the characters and their actions and the circumstances that shaped them.