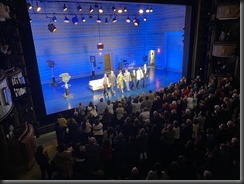 In 1958, Oscar Lavant was well known as a pianist, actor, and humorist. It was his sarcastic wit that set him apart and the reason that Jack Parr invited him as a guest on The Tonight Show. Unknown to Parr, Lavant's wife had him committed to a hospital to treat him for his drug addictions and temper. Luckily (or unluckily) he was released for a few hours to perform on Parr's show.

"Good Night, Oscar" - a play by Doug Wright - tells the story of that night.

The story moves seamlessly from hilarious one-liners to poignant moments between husband and wife to the tragedy of a man battling his demons. It is a roller coaster ride of emotions.

Sean Hayes, famous as Jack in the long-running TV show "Will & Grace" - is brilliant as Lavant. He captures a talented, but tortured soul, who craves an audience but deflects praise. He is the personification of imposter syndrome, forever comparing himself to his late friend George Gershwin to whom he can never live up. Portraying mental illness on stage or screen is always risky, but Hayes pulls it off successfully.

At the end, Hayes surprises us all with a vibrant rendition of Gershwin's "Rhapsody in Blue".

I have no idea how much of this story is true, but it was true for me. I felt the pain of the characters and I felt Lavant's need to salve his inadequacies with his caustic wit.

I came away more than satisfied.