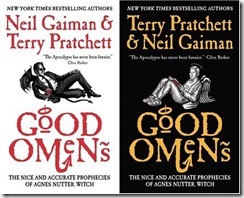 Aziraphale is an angel and Crowley is a demon and both have been living on Earth for thousands of years and they have grown to like it. They even like each other. Sort of. So, they are distressed to learn that the antichrist has been born, signaling the impending end of the world.

Anathema Device is the descendent of Agnes Nutter - a 17th century soothsayer whose predictions have all come to pass. Agnes has predicted the coming Armageddon.

Newton Pulsifer and Sergeant Shadwell are incompetent witch hunters, who only know that something strange is going on, so they chase it across England, trying to avoid bad people and any monetary expenditures.

The Chattering Order of St. Beryl are a group of bumbling Satanists charged with swapping the newborn antichrist, so he is raised by a powerful political family. They accidentally place him with the wrong family, so he grows up in a small Oxfordshire village raised by middle class parents.

Years later, the Four Horsepersons of the Apocalypse are racing toward the 11-year-old antichrist, planning to finalize his rise to power. Horseman Pestilence retired after the discovery of penicillin, so he has been replaced by Pollution.

And then it gets weird.

These are some of the elements of Good Omens by Terry Pratchett and Neil Gaiman - two of my favourite authors.

It's hard to tell which parts are Gaiman and which are Pratchett. Gaiman is better at inventing worlds and making them seem believable. Pratchett is better at laugh-out-loud humour. And there is plenty of both in this story.

Good Omens is a tale about the worth of humanity and about the relative power of nature versus nurture. But mostly it is about silliness and funny jokes. If you love Gaiman and you love Pratchett (and who doesn't?), you will enjoy this book.