"Goodbye to Berlin" by Christopher Isherwood 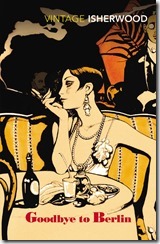 Author Christopher Isherwood lived in Berlin, Germany in the early 1930s. In 1939, he published a fictionalized collection of short stories about his life during that time.

This collection - published as Goodbye to Berlin - is often packaged with Isherwood's earlier semiautobiographical novel Mr. Norris Changes Trains as a single volume under the title: The Berlin Stories. But unlike the earlier novel, the Goodbye narrator explicitly identifies himself by name. And the latter novel has much more depth than Norris. Whether we are hearing about two gay men in a doomed relationship or a struggling working-class family living in a condemned attic or a wealthy Jewish family under attack from fascists, the reader understands the people with whom we interact. They are real to us.

The stories sometimes cross one another's timelines, but each concerns Isherwood's relationship with a person or group of persons.

The most interesting character is Sally Bowles - a charming gold-digger who tries to sleep her way to a successful acting career. Christopher develops a fondness for her and a friendship, despite his jealousy of her many lovers.  This story inspired the popular musical "Cabaret" in which Liza Minelli starred as Sally.

In the final chapter, the author leaves Berlin to escape the brutality of the new regime, and the changes to the atmosphere, culture, and safety of the city he loves. But many of the other characters say "Goodbye" to this city throughout the novel - they either depart suddenly to travel abroad or they disappear mysteriously.

Goodbye to Berlin shines as a study of human relationships and the ways we interact with one another and communicate day to day. It shines as a commentary on the roles of men and women in society. And it shines as a study of the oppression experienced by Jews and other minorities during the rise of the Nazis to power in Germany.

The author put it best when he wrote:

Isherwood belonged to Berlin - but it is a Berlin that ceased to exist after he left.