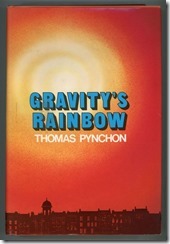 It is near the end of World War II and the Germans have apparently developed a new weapon of unknown capability with the unlikely serial number "0000".

The allies are looking for it, while they analyze the pattern of bombs dropping on London. One pattern they cannot understand is why a bomb consistently falls on a location a few days after US Army Lt. Tyrone Slothrop has sex in that location. Eventually, Lt. Slothrop is sent to Germany to search for this mysterious weapon. On his journeys, he disguises himself as a superhero and as a pig.

Gravity's Rainbow by Thomas Pynchon follows Slothrop on his mission to find the bomb. But it does not take us on a straight line through his quest. Pynchon introduces us to hundreds of characters - many tangential or completely irrelevant to the story; and he weaves dozens of subplots - many of which have little to do with the broader narrative.

In between, we a lot of sex happens and a bit of scatology and some incest and a story of a sentient, immortal light bulb. It's often entertaining, but all very confusing.

Many parts of the novel are very well-written - told with humor and satire and emotion. The challenge is tying them together. I trust that Pynchon accomplished this, but he makes it a major challenge for the reader to recognize how he did so. Characters are introduced, then disappear for hundreds of pages, before they reappear.

The book was too long and complex for me to enjoy as a whole. It felt like a mashup of disconnected scenes.

This seems like the kind of novel one needs to read multiple times in order to appreciate. At some point, I may return to it and re-evaluate it; but, its nearly 800-page length and the pile other books awaiting my attention will delay that - maybe forever.