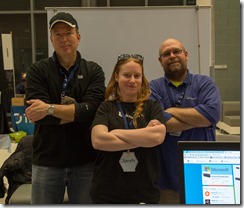 Of course, students love free stuff, so we came armed with some prizes: We gave away a t-shirt to anyone who completed a brief survey. When we ran out of t-shirts, we gave away books, stencils,mugs, and stickers. From those who completed the survey, we drew a name to win a Surface Pro 2.  William Su of Ga Tech won this drawing. We offered a HoodiePillow and a free Azure pass to anyone who wanted to incorporate Azure into their weekend hack. 42 people took advantage of this offer.

Throughout the weekend, the four evangelists answered questions from teams using Azure and other Microsoft technologies.

On the final day, we offered a Dell Venue 8 Pro to each member of the team with the best use of Azure. 18 teams completed an application with an Azure component.

It was a difficult choice and we debated for some time. One team hosted an impressive translation application on Azure; another created a GPS application that displayed the location of the user's dog and whether it had left their yard. 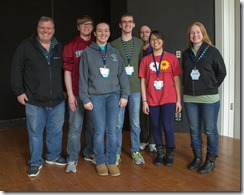 We awarded the prize to a team from Rose-Hulman Institute of Technology for their Flock application - a system built on a Pebble watch to communicate restaurant recommendations to friends. Most of the application logic was in an Azure web service that called out to APIs exposed by Twillio and MailJet. The Pebble watch called to the Azure API. This team spent some time at our booth asking questions of Bill and Martin. You can watch an interview with this team at Technology and Friends.

Bill Fink brought his Kinect Photo Booth and it was a big hit. Many students were drawn to our booth when they walked past and saw themselves in front of a dinosaur or live volcano on the giant monitor at our table. The Photo Booth sent out 102 emails over the weekend. 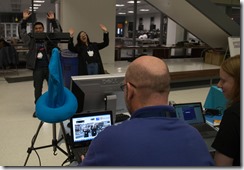 Overall, the event was a great success - Students came away with a positive impression of Microsoft and many used Azure and Kinect that probably would not have had we not been there. Many students were unaware what Azure even is. They were excited when they found out how it could help them and their projects. One team planned to use IBM for their back-end data storage; but after struggling with the IBM service and talking with Bill, they switched to Azure and completed their project successfully.