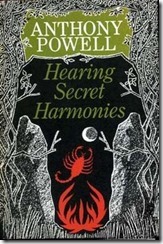 After 12 volumes, Anthony Powell concludes his epic series A Dance to the Music of Time with Hearing Secret Harmonies.

It is the late 1960s. We meet Fiona - the niece of narrator Nick Jenkins, along with some of the members of the cult to which she belongs, including its creepy and charismatic leader Scorpio Murtlock. We will see more of them later in the story.

Much of this series has dealt with Kenneth Widmerpool - a former classmate of narrator Nick Jenkins - who has risen to power through blind ambition; so, it is fitting that the final volume focuses much of its energies on his last days. Widmerpool is now an old man losing some of his cognitive abilities. He now rejects bourgeois society, embraces the counterculture, has joined Murtlock's cult, and is striving for humility. He is regretting some of his past actions - possibly as a result of his wife's suicide in the previous novel. Part of the old Widmerpool remains, as he challenges Murtlock for control of the cult.

A few other old characters return - some only peripherally:

The cult attempts to raise from the dead Dr. Trelawney, who led a cult in earlier Time novels.

In a series not known for plot twists or cliffhangers, this final novel does a good job of wrapping up the story.

This series as a whole exceeds the quality of any individual novels.

Reading A Dance to the Music of Time has been an amazing journey and I am happy to complete that journey.